Everyone wants to live in a nice clean neighborhood and in a clean town overall. I think most people would agree that our sanitation crew does an excellent job at picking up our household garbage and trash.

Most cities either offer monthly or quarterly heavy trash collection in different areas of their city, where the resident is required to only place debris for pickup during their scheduled route area. As you know, Deer Park picks up heavy trash weekly. This is a huge service that the city provides for its citizens. Other cities also have the large plastic trash bins that have to be set at the street curb and the sanitation crew will only pick up what is actually inside the trash bin. This is because they use a special truck to pick up the can and no crew member is available to pick up any excess. If you have more trash than that, you’re just out of luck until next time. The fact that we still have actual employees to take care of collections is such a great benefit. We all know that occasionally an animal can rip open a trash bag and cause a mess, or sometimes the wind can blow debris out of a loose bag and scatter it around. Our crews take the time to clean up this debris to help keep the city, and your neighborhood, looking nice.

Police officers and fire fighters face job related dangers every day, but it’s not as widely known that garbage collectors do, too. Sometimes we forget how harsh the environment they work in can be. Not only do they have to work on the back of a truck whether it is 100 degrees, 20 degrees or raining, they also have to deal with broken glass, ants, sharp metal objects, and medical waste such as sharp needles that are disposed of illegally. In fact it ranks third on the list of riskiest jobs in the US, according to a study conducted by the University of Miami. The injury rate is staggering, according to the study. Collectors, on average are injured five to seven times more than the average worker. Most of those are back injuries and lacerations. 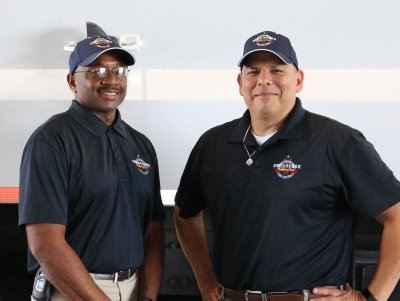 Hurricane season is less than a month away. In the event the City were to be hit by a storm, our crew will stay, sheltered, during the storm and then as soon as the storm passes and it safe for them to get on the trucks, they will start picking up the mess left behind. After hurricane Ike Deer Park had the fastest response time for after-storm-pickup, compared to other local areas. Again, we can’t say enough for how proud we are of this department and the work they do for all of us.

For more information about the Sanitation Division please visit their webpage.