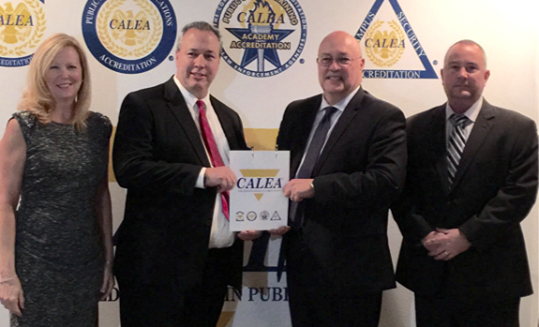 The Deer Park Police Department recently accepted the Re-Accreditation with Excellence Award from the Commission on Accreditation for Law Enforcement Agencies, Inc. (CALEA).

The CALEA Accreditation with Excellence Award is intended to provide agencies the chance to be recognized for the effective use of over 400 mandatory and elective standards for enhanced public safety services and management professionalism.

According to DPPD Chief Greg Grigg, this designation places the department in the top one% of all police agencies in America.

“The CALEA Gold Standard Reaccreditation with Excellence Award helps validate to the citizens of Deer Park that their police agency meets the highest standards of the policing profession,” Grigg said. “I trust our citizens are excited as I am to have received this award.”

“The actual assessment process involves not only review of our files, but also site visits and interviews with our staff,” Grigg said. “The report we got this year was the cleanest one we’ve ever gotten.

“For example, to achieve reaccreditation with excellence, the agency must be in compliance with 90% of all applicable other-than-mandatory standards, and we were at 92%.”

According to Grigg, the department has earned CALEA accreditations every three years since 2006, with the most recent two awards achieved with excellence.

However, while the awards are only given every three years, Grigg said the department works throughout the award period to stay in communication with CALEA.

“Sgt. Daniel Rouen, the Accreditation Manager for our department, works throughout the process between accreditations to make sure we’re staying in compliance,” Grigg said. “We have to submit a report to CALEA every year to let them know where we are, and that allows us to touch and become re-familiarized with everything that goes on in the department at least once a year.”

According to Rouen, the reaccreditation process gives the citizens of Deer Park a clear indication of the department’s commitment to professional law enforcement.

“CALEA helps us to maintain our professionalism and ensures our accountability to our community,” Rouen said. “Through the hard work of the women and men of the Deer Park Police Department, we were able to once again achieve Accreditation with Excellence.”

The Commission on Accreditation for Law Enforcement Agencies Inc.

The Commission on Accreditation for Law Enforcement Agencies Inc. (CALEA) is an independent accrediting authority developed in 1979 by the four major law enforcement executive associations, who represent about 80% of the United States law enforcement profession. They are the International Association of Chiefs of Police (IACP); the National Organization of Black Law Enforcement Executives (NOBLE); the National Sheriffs' Association (NSA); and the Police Executive Research Forum (PERF), all of which continue to serve in an advisory capacity.

CALEA has 21 Board of Commissioners - 11 of whom represent public safety agencies and 10 from the public and private sectors. CALEA was established for two reasons: to develop a set of law enforcement standards, and to establish and administer an accreditation process through which law enforcement agencies could demonstrate voluntarily that they meet professionally recognized criteria for excellence in management and service delivery. The Deer Park Police Department has been a CALEA accredited agency since 2006.